Stage nine took us from Burlington to Golden, Colorado. The riders had to climb 2,000 feet.The total distance was 250 miles. But the real altitude test will be tomorrow as the riders cross the Rocky Mountains.

The finish today is at David Uhl Studios. All four Team Vino riders crossed the finish line with full points, as did Pat and Cris Simmons. They said it was a tough ride — sometimes on the Interstate dodging cars, sometimes on narrow, winding roads with no shoulder at the base of the Rockies. In fact, a Henderson rider went off the road and down into a ravine. He managed to climb out, tape his handlebars together and finished the race! (Note: when I first wrote this story, those were the reports I had heard from other riders who saw the bike and noted that it did not look too damaged — and had, in fact, only taped handlebars. The rider, Clyde Crouch #31 was standing, and perhaps they assumed he would continue to ride. However, the EMT who rode with the riders, Vicky “Spitfire” Sanfelipo convinced him that a trip to the hospital might be in order. Good thing. Clyde is now recovering from surgery and broken ribs. Clyde’s bike is a 1929 Henderson KJ.)

As crew members we anxiously await the riders arrival, and are always relieved when they all make it in safely with no breakdowns. Below are images from today / Stage 9: 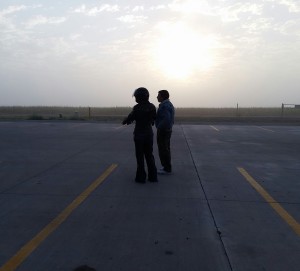 Sharon examines the road and the cool weather conditions in the early morning light. 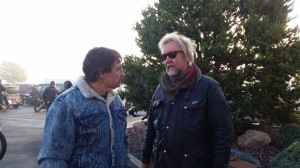 Chatting with John Landstrom, rider #53 about his 1928 BMW R62 and his recent riding adventures. 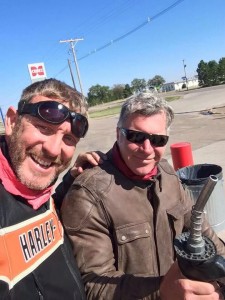 Robert Gustavsson and Dean Bordigioni of Team Vino at a gas stop during the day. 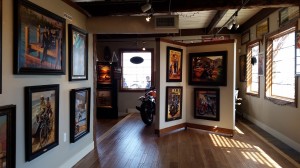 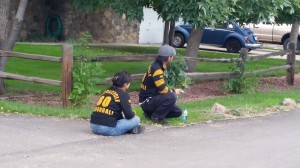 Shinya Kimura’s team wait to see if he makes it to the finish.(This was just outside of David Uhl Studios.) 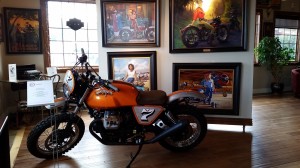 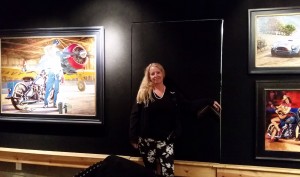 The images above are from David Uhl Studios. Like Scott he is an
official Harley Davidson artist, although their styles differ. 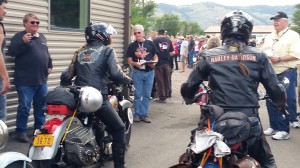 Pat and Cris Simmons push their way to the finish line.