Stage One — The ride started with a flourish, a bang and a sputter. The first run was from Daytona Beach to Lake City, Florida — a relatively short 140 mile ride. The four riders from “Team Vino” are:

Three of the four made it to the final destination unscathed. Sharon’s bike blew both pistons, so riding all day quickly turned to wrenching all night by the light of a Coleman lantern. Apparently the hand oil pump did not work properly and an engine without oil is an unhappy one — pistons seized, engine stops.

Here are scenes from the day / stage 1: 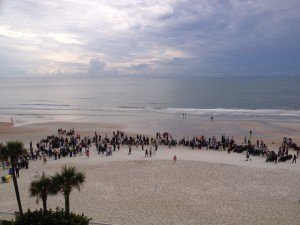 The riders assembled on the beach at Daytona before the start of the coast-to-coast race. 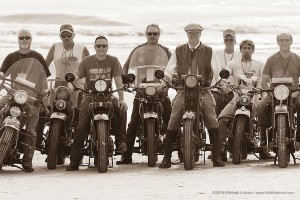 This is Scott and Dean of Team Vino taken from from Michael Lichter’s final panoramic image at Daytona. 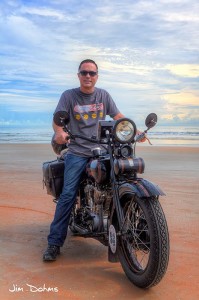 Beautiful image of Scott Jacobs on the beach by Jim Dohms. 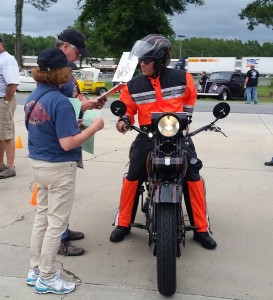 Scott Jacobs checks in with full points in Lake City. He is in his rain gear as it was a slick, wet ride. 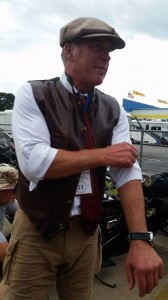 Dean Bordigioni rolls up his sleeves satisfied with his run. 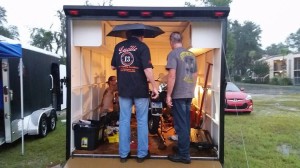 Everyone checks the progress on Sharon’s bike in the trailer. Mechanics are working by the light of a lantern that we had to run and buy at Walmart. 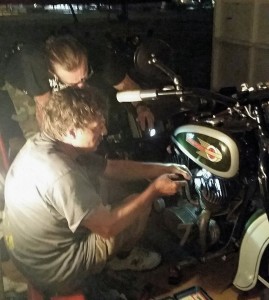 All of the onlookers have gone to bed. Now the serious wrenching can begin. It is 2:00 am.