Stage seven — The Cannonball Run is a bit like a traveling circus with both the thrills and perils. Several riders are out with irreparable machines. One rider broke his foot and while the bike rides on (atop his partner’s trailer ) he is in the hospital with pins in his foot. He’s out for the race and returning to South Africa. Today’s stage from Sedalia, Missouri to Junction City, Kansas saw more than its share of calm and chaos.

Sharon’s bike “Frankie” is running like a champ. She started and finished the full 244 miles. Team Vino mechanics saved the day for Pat Simmons by fixing a sticky mechanical problem on his bike relating to the condenser, which got him back in the race. Robert Gustavsson had a coil problem and broke down half way through the ride. He found himself on the short bus signing the “wall of shame”. (Riders who break down have their bikes picked up by a sweep team who drive a school bus with a trailer attached. On the walls of the bus are the signatures of many riders.) It was really unlucky. Robert’s perfect score is shot. But the major bummer of the day was Ken Smith’s #106 bike going up in flames in Sedalia. And adding to all the riders’ miseries it proved to be a very cold and wet day. 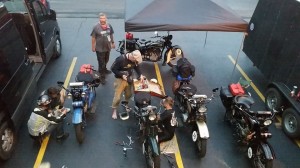 Classic Motorcycles checks out Pat Simmons’ bike and was able to solve his problem by adding a newer style coil and condenser to get him back in the race. 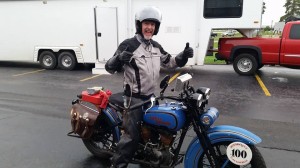 A happy rider. His bike is back on the road. 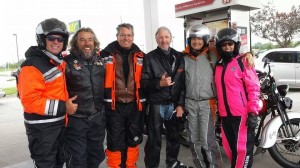 Riders on the road in rain gear during a gas stop on the ride. Scott, Oz, Buzz, Pat, Cris and Sharon. 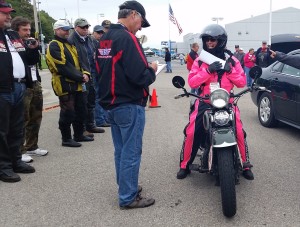 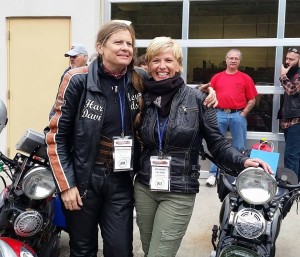 Full points two days in a row. Yes we can.
(Out of the rain gear now.) 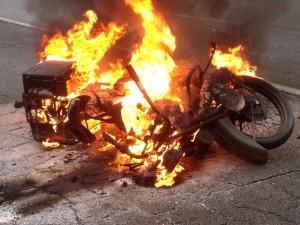