Stage six kept us in Missouri for 291 miles. The ride began in Cape Girardeau and ended in Sedalia, taking us across the state in a northwesterly direction. Sharon’s bike nicknamed “Frankie” got repaired in Cape Girardeau early the day before with enough time to do some test runs before today’s start. “Frankie” was a happy Harley – a 1936 VLH.

As luck would have it the nearly 300 miles would be in the rain. But overall it was a great day for Team Vino. All four riders got full points. Scott #93, Dean #11 and Robert #76 have perfect scores in their respective classes. Scott and Dean are in Class II based on their engine size. Robert and Sharon #81 are both in Class III, as they have more displacement. Cris #89 and Pat Simmons #100 are also in Class II. 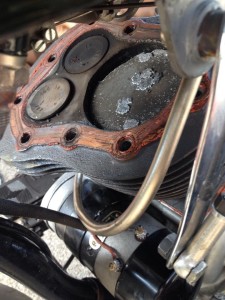 Scorched piston — the third one on Sharon’s bike.Mechanics replaced it in 3-4 hours with a new one from another VL. 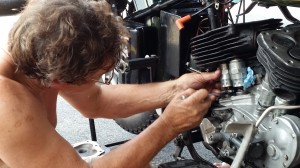 The “king” of Classic Motorcycles adjusts the valves while rebuilding the top end on Sharon’s bike. New pistons and cylinders are installed. 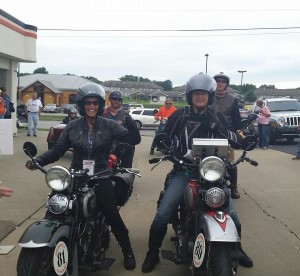 Sharon Jacobs and Cris Simmons cross the finish line on stage 6… after riding in the rain. Awesome. 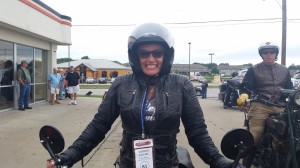 The smile of success.

For more pictures and videos check our Facebook Fan Page.