Stage twelve took us from Springville, Utah to Elko, Nevada. For the riders it was another 300 mile trek on their vintage motorcycles. The days are beginning to blend one into the other. Most of us do not know what day of the week it is, haven’t watched news and are generally living in the Cannonball “bubble”. The biggest changes are the scenery / climate, and what mechanical problem du Jour has to be solved to make the bikes road worthy again. Today’s stage as drawn out on the map below was from L to M. (Click on the map to enlarge .) 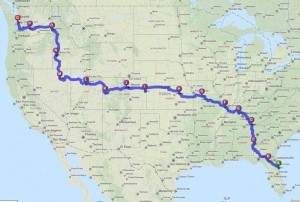 The Cannonball road map. The total miles are 3938.

What made this particular stage memorable was the stop at the Bonneville Salt Flats. All of the riders who were still running staged their bikes out on the flats to pose for a group panorama shot similar to the one at the start of Cannonball in Daytona Beach. It was a long, hot ride for everyone, but the memories of the salt flats will stay with us. 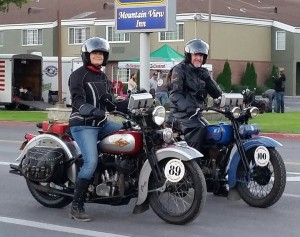 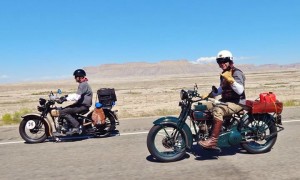 Robert and Dean somewhere in the Utah desert. 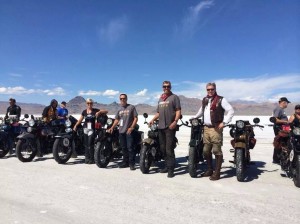 Team Vino at the Salt Flats. 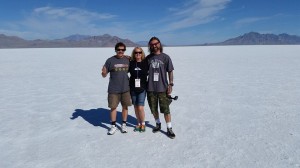 We are the Team Vino crew. 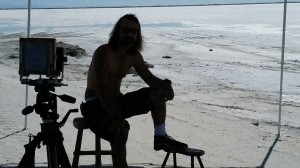 The photographer posed mechanic Chrystiano Miranda in front of the Salt Flats.

The end of the day provided two surprises — first we had a freak wind and rainstorm followed by a lovely rainbow, and then to cap it off we celebrated Robert’s 45th birthday. 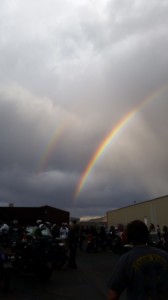 The double rainbow after the storm. 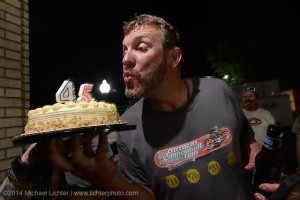 We celebrated Robert’s birthday with Pizza and cake.
Photo by Michael Lichter.