Stage Sixteen and the Grand Finish — This is the final leg of the Cannonball Run. It took the riders from Yakima to Tacoma, Washington — a mere 142 miles — for the grand finish at the LeMay Car Museum. It was exciting down to the last rider. What most expected to be an uneventful, short ride turned into drama for 2nd place rider (in Class II) Mike Carson. Half way into the ride he lost a rocker arm. He and his fellow riders from Team Carson searched the area up to a mile from where he stopped. They found the missing piece, Macgyvered it back together and Mike completed the run, maintaining his narrow lead over Scott Jacobs.

Before the ride began, our team was unusually nervous. Dean and Scott had perfect scores and worried that last minute snafus would derail their victory. In fact, there was one last minute panic when Robert could not get his bike started. The mechanics rushed in to help, pulling spark plugs and checking the battery. It turned out to be as simple as forgetting to turn on the gas petcock. That’s what nerves will get you.

It was a wonderful finish, with hundreds of fans. Team Vino had another flawless victory, and were joined by Pat and Cris Simmons. We were also entertained by the Seattle Cossacks, a motorcycle stunt and drill team. The stunts are all performed on 30s and 40s vintage Harleys. It could not have been more appropriate.

Below are images from Stage 16: 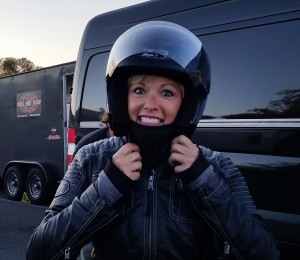 Sharon with butterflies in her stomach at the day’s start. 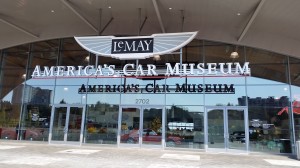 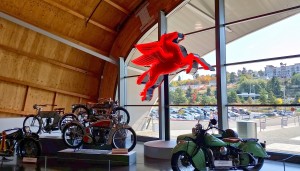 The only motorcycles in the LeMay Car Museum, which was the location of the race finish line. 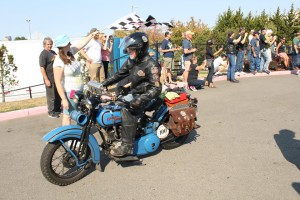 Pat Simmons gets the checkered flag at the finish line. 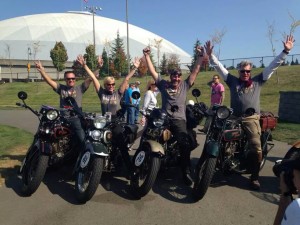 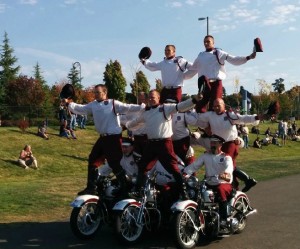 Great entertainment from the Seattle Cossacks stunt and drill team on vintage Harleys. 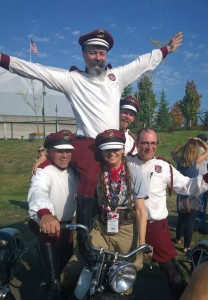 Cris Simmons trying out for the Seattle Cossacks. 🙂 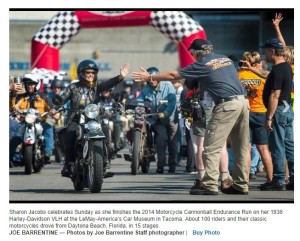 Sharon makes the cover of the Tacoma News Tribune.

The creme-de-la-creme after having two perfect scores on our team was for Sharon to make the cover of the local newspaper to commemorate her coast-to-coast journey on a vintage Harley Davidson.