Denouement — a final assessment of the Cannonball Run. It took 17 days and nearly 4000 miles from the shores of the Atlantic Ocean in Daytona Beach, Florida to its final conclusion in Tacoma, Washington yards from Puget Sound, an inlet of the Pacific Ocean. It was a hell of a ride, and a pleasure to participate. Thank you Scott and Sharon Jacobs for inviting us on this adventure.

There were more than 100 riders on pre-1937 motorcycles who began this cross country journey. Not everyone completed the endurance run. There were injuries along the way — some serious — fires and irreparable machine breakdowns with rare parts nowhere to be found. But there were 24 riders in all with perfect scores:  two of whom were our very own Dean Bordigioni and Scott Jacobs. It is an accomplishment of which they can be proud. They rode the full 3,938 miles from coast to coast. It was a team effort, but they put in many grueling miles on their beloved machines. Robert Gustavsson suffered only one breakdown due to a bad coil. He had a spare one. I am sure he wished he had it with him that day. Robert did most of his own repairs and he is a very talented engineer, having built the motorcycle himself. Robert placed 39th having ridden a total of 3,815 miles.

The real heart of our team, however, was Sharon Jacobs. She broke down on day one, through no fault of her own. The hand oil pump on her motorcycle did not function properly and resulted in no oil in the engine, and it seized both pistons. Team Vino mechanics used the old undersized pistons — essentially Macgyvering the machine — to get her up and running again. Her bike, nicknamed “Frankie” hung on for another day and a half, but the undersized pistons were no match for the challenges of the road. Fortunately, the Jacobs had an ace up their sleeve. They had another Harley Davidson VLH in California from which they could rob the pistons and cylinders for Sharon’s bike. But alas, it was on a Sunday when Frankie sputtered and coughed to a stop and we had to wait until Tuesday for the parts. And in the midst of this motorcycle chaos, Sharon learned that her brother had died. That pushed us all to keep Sharon in the race. Once Frankie was back together — the mechanics did it in just over 3 hours — Sharon had 11 straight days of perfect scores. She never once complained, babied Frankie like a pet poodle, fought with the kick starter as it occasionally bit her back, and endured a few sexist comments, “Missy you’ve got to do better than that.” Well, she proved them all wrong and finished with grace… and graced the cover of the Tacoma newspaper at the finish line (photo on stage 16). Sharon placed 60th out of 105 original entrants. She rode a total of 3,391 miles.

The overall winner of this event was Hans Coertse from South Africa. Yes, there was a winner, and he — and the other winners — were celebrated at a final banquet at the Hotel Murano in Tacoma. Hans rode a 1924 600cc Indian Scout, and he rode every mile of this endurance run. He was a Class I rider with a smaller engine, which earned him the winning trophy. In Class III — for motorcycles over 1,000cc — third place went to Peter Reeves, while Jon Neuman took second and Jeff Tiernan was awarded the class championship. In Class II — for 700cc to 1,000cc machines — Team Vino’s Scott Jacobs took third place, Mike Carson finished second and another Team Vino entrant, Dean Bordigioni, won the championship. And in Class I — for machines under 700cc — Italy’s Giuseppe Savoretti finished third, Norm Nelson took second and South Africa’s Hans Coertse, as mentioned, won the championship. These riders came from many countries: France, Germany, England, Italy, South Africa, Japan and from across the USA.

The Cannonball is not a traditional race. It is an endurance race; a race of attrition. You have to think on your feet (or rather on two wheels), you have to survive, and you have to have good support — whether it’s mechanical or emotional support. As we all charged across the country together it felt at times like a traveling circus. It was chaotic, frustrating and entertaining. But I do not know if calling it a traveling circus does it justice. We began as a group of strangers who lived worlds apart, and we ended as a close-knit circle of friends who shared a love of motorcycles and adventure. We have all gone back to our daily lives enriched from our experience and our new circle of friendships now stretches across continents. 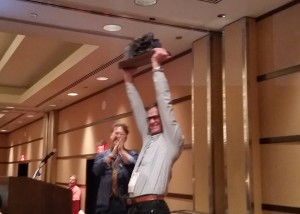 Hans Coertse with the winning trophy. 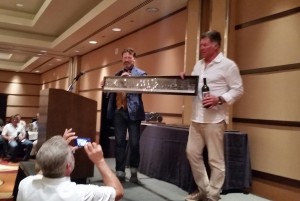 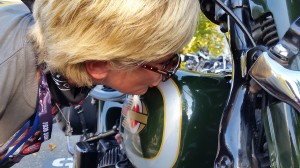 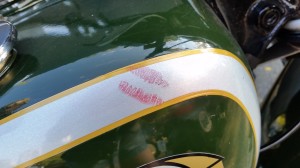 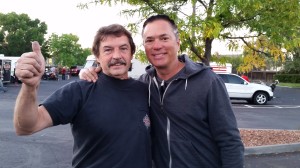 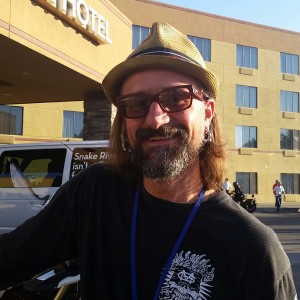 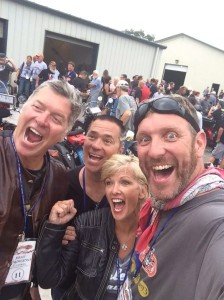 How I remember our Team Vino champions.