Today’s first stage was short but difficult. It was 98 degrees with about 95% humidity; tough on the bikes, the riders, in short, everyone. Our team left from the Golden Nugget and had a smooth ride to the Atlantic City boardwalk for the official start. They began in stages: the oldest bikes in Class I left first, class II second and our riders, who are all in Class III, left last. The first 25 or so miles went well for our team, but Sharon’s bike started to have difficulty. It ran, she felt, like it had bad gas. Perhaps fuel delivery, magneto, carburetor? Our mechanic / detective is hard at work while I write. 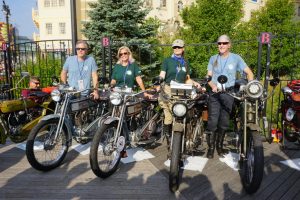 Team Honeymooners line up on the Atlantic City boardwalk 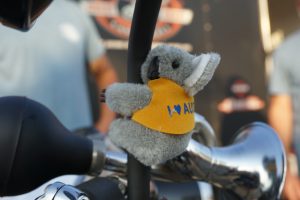 Sharon was born in Australia, so the Koala bear was a nice touch — a gift from Chris Koop #16 from Australia. 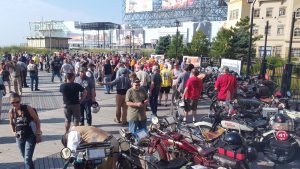 The scene on the boardwalk this morning. 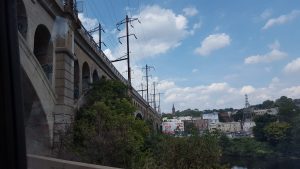 A view from the crew van during our drive in PA.

Honestly, many bikes never even made it to the Boardwalk. We saw class I riders pedaling frantically to restart their bikes by the side of the road, but heat stroke for a rider is a big price to pay for winning your first stage. One motorcycle, a 1916 Harley, caught fire, and that’s all folks for number 36, John Pfeifer’s bike. 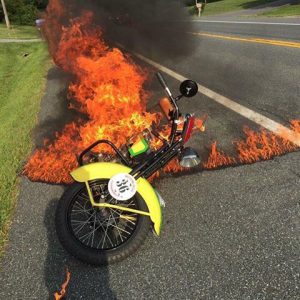 Thankfully, Scott Jacobs, made it in for full points, as did Cris and Pat Simmons. We waited a long time in the hot sun wondering where Cris and Pat were. It turned out some bad directions on the scroll boxes sent them down a 40-mile rabbit hole. However, due to a chaotic start, miserable traffic and unbearable heat, they gave all riders who came in to the finish line full points for today’s stage. 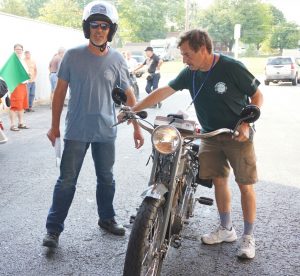 Scott was awarded full points for his ride today, but it was a fight in the heat. 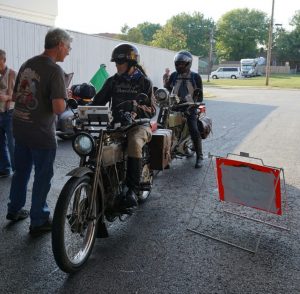 Cris and Pat happy to have arrived after the detour.