I have a song running through my head, “Born Under a Bad Sign”, and in this case it’s Ursa Major or the Big Bear. The day began well. All four Team Honeymoon riders left our hotel for the official start a few miles away. They looked great going down the road together. As the crew drove along and we did not hear the phone ring, we dared hope that there would be no problems and that our riders would all come in for full points. 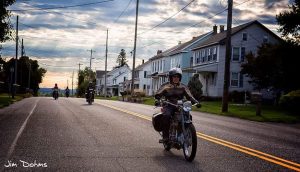 Scott and Sharon outside of York, PA photographed by Jim Dohms.

The first call came during lunch. Pat Simmons was having clutch problems and was trying to fix it. Then Sharon’s engine breather tube came loose spewing oil all over the cylinders. The mechanics gave numerous suggestions over the phone and we waited. The next call verified that Pat was on the “short bus” and that his bike would have to be towed to the finish line. 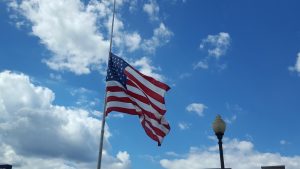 As we drove we noticed that all of the flags were at half mast. It took us a while to realize that it was in remembrance of 9/11. Sometimes on the road we don’t know what day it is. 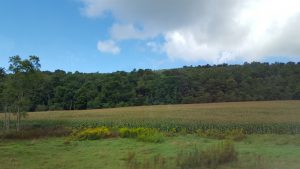 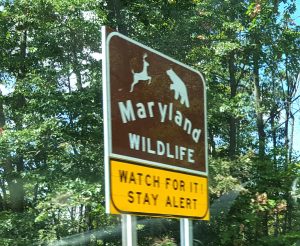 I thought this was an interesting sign as we passed it on the road. I wondered how often one would actually see wildlife.

We finally made it to the hotel and were checking in to rooms, when we received another call. Sharon then relayed the worst news possible: a rider was down, and it was Scott. She was calling from the ambulance. We drove back to Cumberland, Maryland and met them at the hospital. Medical tests determined that Scott had broken his right shoulder. Surgery will have to be performed. We brought drinks, extra clothes and provided what moral support we could, but eventually had to return to our hotel and deal with the broken down bikes. 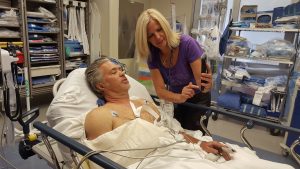 Scott and Sharon in the trauma unit at the hospital. His right shoulder is quite swollen.

We headed back down the Interstate when suddenly a large black bear darted out across the road. We had no room to maneuver. BAM! We hit the bear at 70 mph. The impact was swift and sudden. The bear was dead and we were in shock. We quickly pulled over and we surveyed the damage. Bumper and front panel were crumpled, but otherwise the vehicle was driveable. We got back on the road entirely shaken from the day’s events and headed for the hotel where more work awaited us. 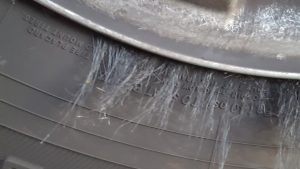 The only positive highlight in the day was that Cris (Mrs. Motorcycle) Simmons made it to the finish with her bike, “Effie”, still running reasonably well. Let’s see what tomorrow brings.