We have had our NSU Konsul II motorcycle for over 15 years. We were invited to show it at Pebble Beach in 2012 and have shown it at the La Jolla Concours d’Elegance and at Del Mar. It’s not a motorcycle most people are familiar with. So what does NSU stand for? The company was headquartered in the southern German town of Neckarsulm, where the Neckar and Sulm Rivers meet. NSU stands for Neckarsulm Strickmaschinen Union. A Strickmaschine is a knitting machine. The company originally produced automatic knitting machines and later bicycles beginning in 1892. It did not introduce its first motorcycle until 1901. They eventually shortened the name to NSU. Click on any of the images below to enlarge. 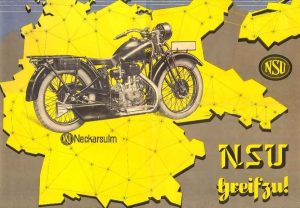 The NSU logo below the rear wheel shows the approximate location of the factory in the city of Neckarsulm. 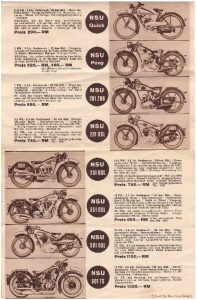 This brochure from 1936 shows the pre-war motorcycles offered by NSU. The prices are in RM, or Reichsmark. 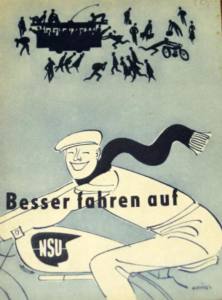 NSU’s earliest motorcycles had a bicycle-type frame, a chain and freewheel, and bicycle brakes. They were after-all a bicycle factory. During the second World War they went on to make motorcycles, sidecars and tracked vehicles for the German Wehrmacht. Following the war, they returned to motorcycle production and in the early 1950s introduced the Max, which was to become one of the most successful machines of its time, and would influence emerging motorcycle manufacturers around the world, most notably Honda. 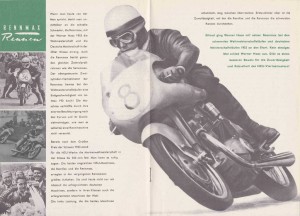 A brochure for the NSU Max from 1953. Featured in the center of the brochure is the RennMax winning racer Werner Haas.

Motorcycle aficionados who are familiar with NSU know of their Fox, Max and Supermax models. Our motorcycle is one of the lesser known NSU models. The Konsul II is a 500cc single cylinder 4-stroke machine with 21 horse power. The first Konsuls came out in 1951 and were designed by Albert Roder, the chief engineer for the company. The 500 Konsul is based on the 501 OSL pre-war model. The Konsul II was the final development of NSU’s big single-cylinder motorcycles. 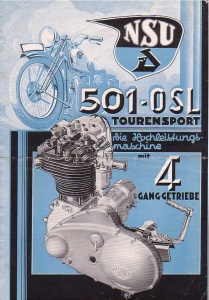 The 501-OSL NSU pre-war motor upon which the Konsul II is based. 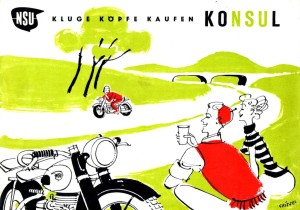 NSU, in fact, produced two Konsul models; the Konsul I is the 351 OS-T and the Konsul II is known as the 501 OS-T – essentially a 350cc vs. a 500cc engine. Both of these Konsul models were built beginning in 1951 and up to 1954, which was the last year motorcycles were offered in these cubic capacities. A sport version of the Konsul II was also available with a larger carburetor and the high pipes, as seen on our motorcycle. 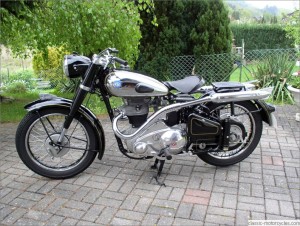 The high pipes were available for the sport version of the 500cc Konsul II. 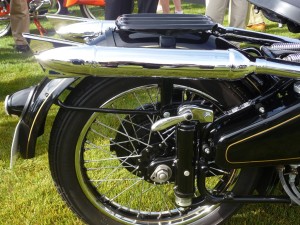 Today in Neckarsulm there is the Deutsches Zweirad und NSU Museum where you can visit a fascinating collection of motorcycle history. 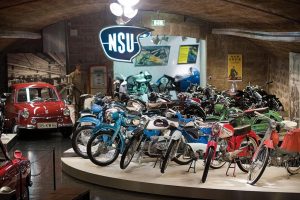 Inside the NSU Museum.